From April 9th to 14th, farmers from Indonesia came to Japan to submit a letter demanding that the Japanese government and the Japan International Cooperation Agency (JICA) stop financing the coal-fired power plant project in Indramayu, West Java, Indonesia.

>Here is the letter submitted by the farmers (originally in Indonesian, translated into English) 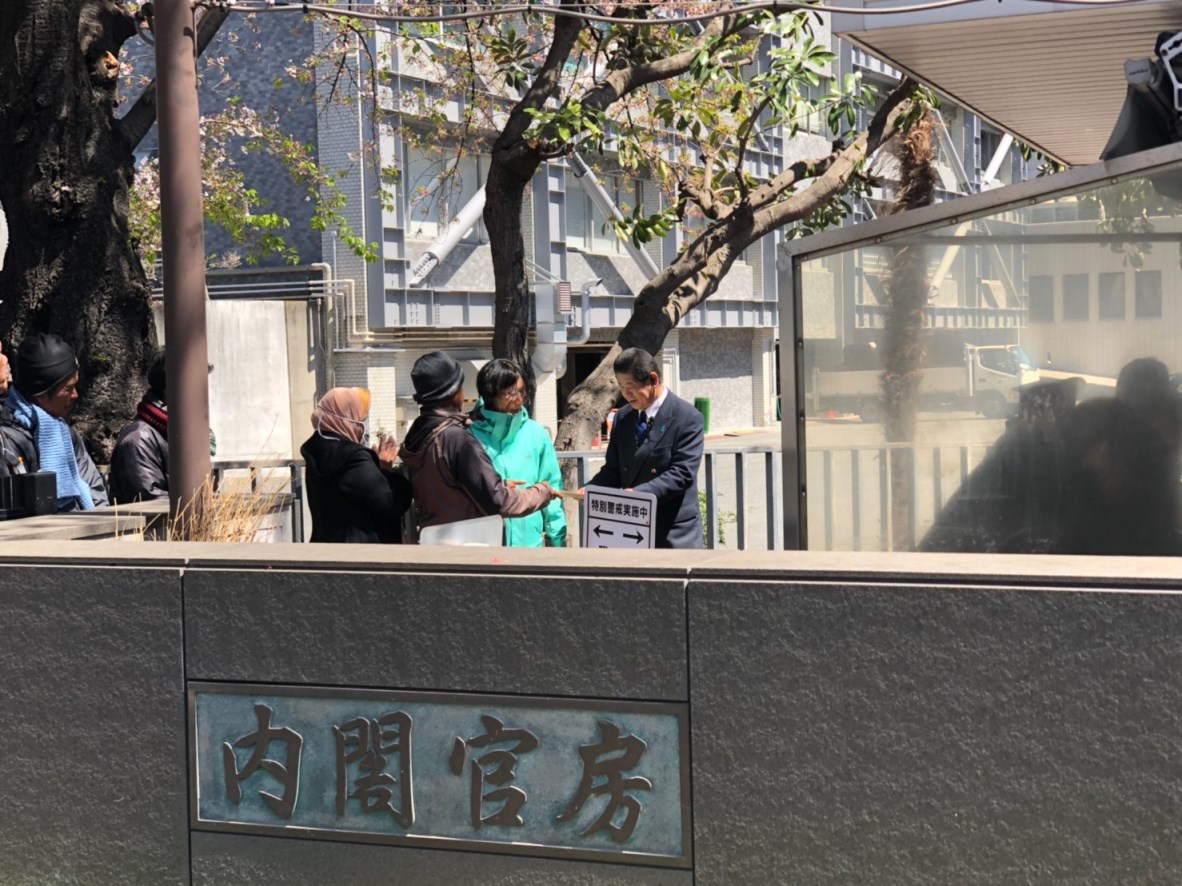 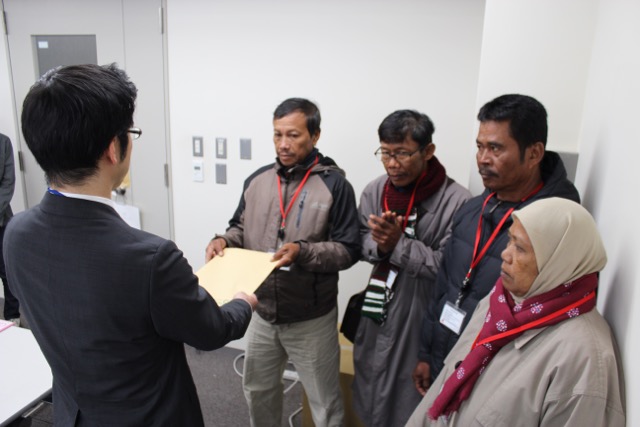 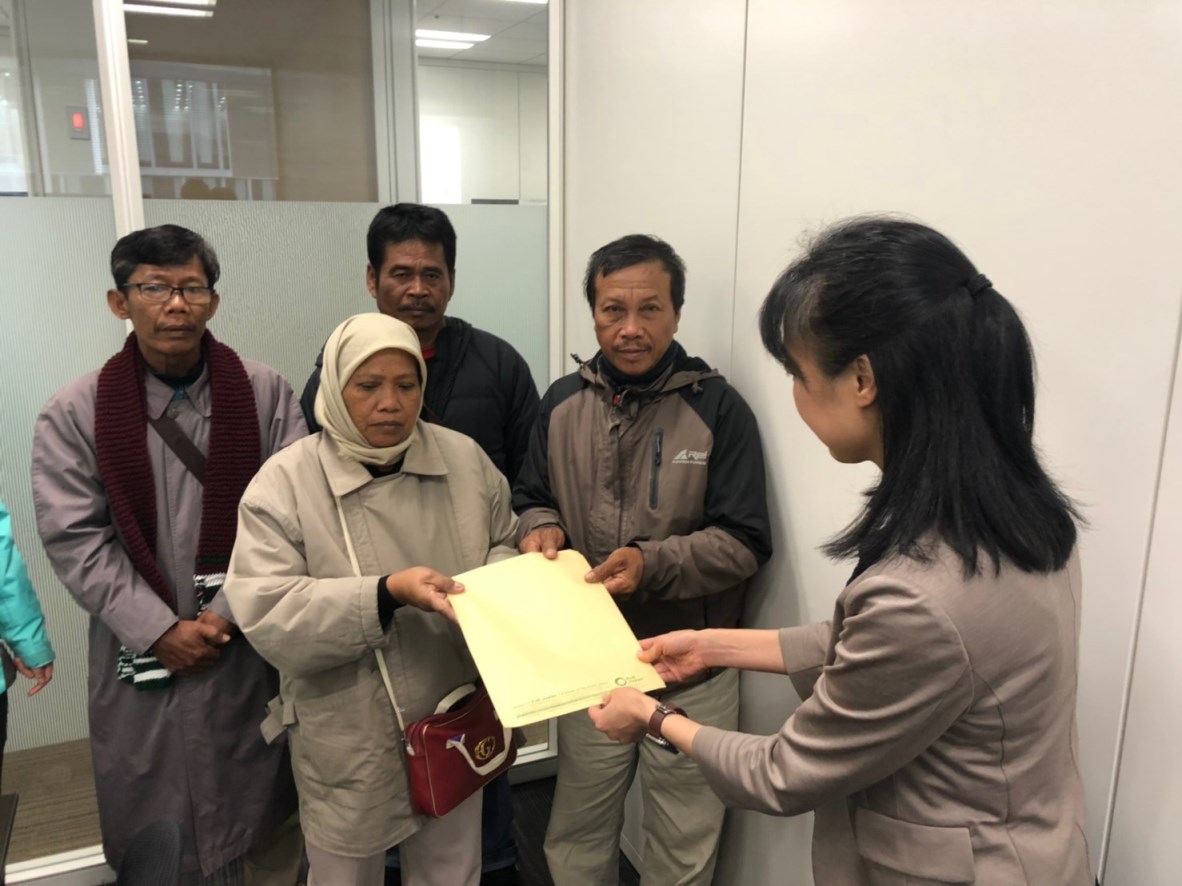 Farmers handing their letter to (from the left) the Cabinet Office, the Ministry of Foreign Affairs, JICA

Four farmers came to Japan this time, all of who belong to a local resident group named Jaringan Tanpa Asap Batubara Indramayu (JATAYU), or Indramayu Network of Free Coal Smoke in English. In addition to those four, two people from a local NGO Wahana Lingkungan Hidup Indonesia (WALHI) – Friends of the Earth Indonesia also came to Japan. They have been continuously supporting the local community as a lawyer and a community organizer.

During their visit in Japan, they participated in a series of activities, including a press conference, a study session at the building of the House of Counselors, a seminar, a protest in front of the Ministry of Foreign Affairs (MoFA), and meetings with MoFA as well as JICA. Each of them spoke their reason they are against the project and also the local situation of serious human rights violation, sometimes with tears in their eyes. They repeatedly addressed they want Japan to stop its support to the project. 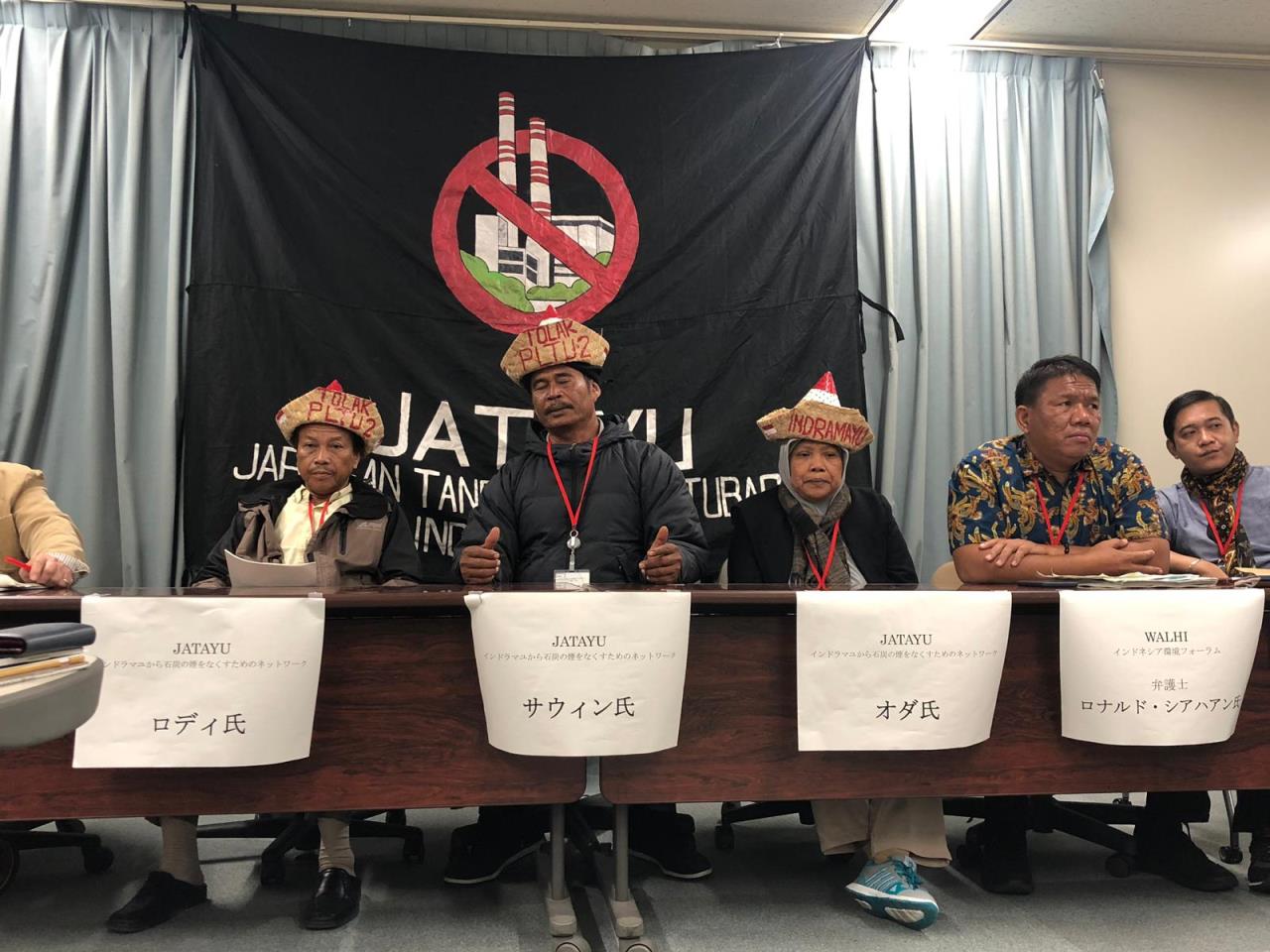 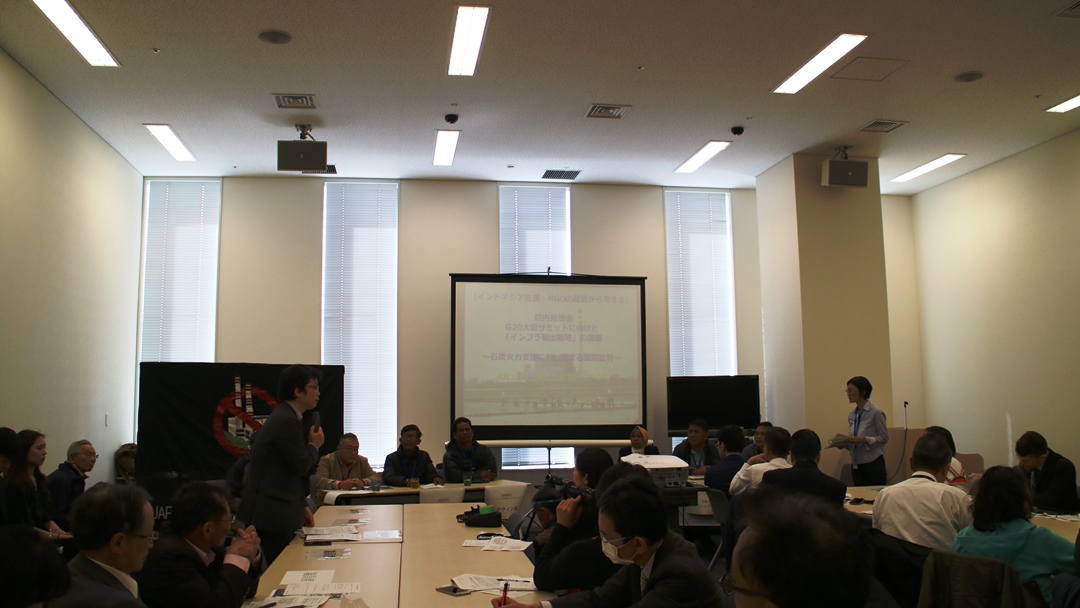 (left) press conference, (right) study session in the building of the House of Councillors 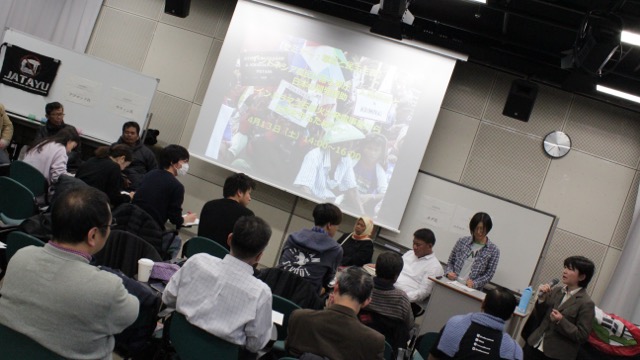 (left) Seminar at Hosei University, (right) Protest in front of the Ministry of Foreign Affairs

Here is the brief summary of what each member talked about below:

Mr. Ahmad Yani (Advisor of JATAYU)
For about 3 years we have been protesting against the project because we are afraid that the project will take away our farmland and ocean. It will also bring serious impact on our health. Our rice fields are very fertile; they can produce about 16 tonnes (double cropping) of rice every year. How are we going to live if our land is taken away?
We went everywhere in Indonesia to have our voices heard, from the project area to places like the legislative council of Indramayu Regency, the government of West Java and even to the front of the Presidential Office in Jakarta. However no one listened to us. That is why we came all the way to Japan to ask you to stop your support to the project.

Mr. Rodi (Chairperson of JATAYU)
Because of the existing coal-fired power station that has been in operation since 2010 in the area, the coconut trees around the station died, and children are suffering from respiratory illness. We cannot catch as much small shrimp as we used to either. The planned station is even larger than the one that already exists, and therefore everyone is worried that it is going to worsen the situation that is already bad enough. We strongly oppose the idea of constructing another coal-fired power station in our village. We would like Japan to stop its support to the project.

Mr. Sawin (Member of JATAYU – falsely imprisoned for 5 months until February 2019)
We, JATAYU filed a lawsuit against the Indramayu Regent to revoke the Environmental Permit at the Bandung district administrative court, and we actually won the case. We all celebrated our victory and I put up the national flag in our village in the late afternoon of Thursday.
The next day when I went to check however, the flag was taken away by someone without my consent. A few days later on Sunday at 1 a.m., suddenly five policemen with rifles came into my house, and told me that they would arrest me. My wife shouted crying, “my husband is not a terrorist or a criminal. Why would you take him?” They told us that I insulted the national flag by putting it up upside down, and that is why they are going to arrest me. I told them I did not do it, but they did not listen to me. I was then handcuffed, and forced to get into the car. I could see my wife chasing the car I was in, crying.
Fortunately I was released at night on the same day this time. This was in December 2017. Yet the story does not end here. In September 2018, I was asked again to come to the police under the same crime. I was detained as soon as I arrived there. And after several trials, I was sentenced to 5 months in prison.
I have been supporting my family by farming, and the period I was away was such a burden on my wife and child financially as well as mentally. Just because I was raising my voice and opposing the project, I had to spend 5 months in prison where there was no freedom. Who would compensate these 5 months? People in Japan, please stop this project.

Mrs. Odah (Member of JATAYU)
We, female farmers have been supporting our families through various agricultural activities such as planting rice plants and harvesting red onions. If we lose our land to continue these activities, how are we going to live?
I live in the project area right next to the farmland, and there I run a small shop where farmers can rest with small snacks and drinks. This small business has been a help to our family. If the power station is built, I will no longer able to continue this shop. My husband will also not be able to continue his farming. We are really worried.

Mr. Ronald M. Siahaan (Lawyer at WALHI)
For the administrative lawsuit that the members of JATAYU filed, after they won at the district court they unfortunately lost at the High Court and the Supreme Court. This lawsuit process however does not end here, as the JATAYU members will lodge an appeal to the Supreme Court for a verdict review at the end of April or the beginning of May. This means that the final decision on project’s illegality has not been made.
The suppression of people and activists that are vocal to protect the environment has been very serious in Indonesia. As far as we know, 103 residents and 25 activists have faced some kind of suppression just for the first three months of this year. Japan is the 2nd biggest investor to Indonesia. Japan needs to investigate all the development projects that it is part of minutely to check if there is any human rights violation involved.

Mr. Wahyudin (Advocacy Campaigner at WALHI West Java)
Today, the reserve margin of electricity in the Java-Bali grid is about 30 percent. What is obvious even looking at the recent Indonesian Electricity Supply Business Plan (RUPTL) 2019-2028 from the Indonesian state electricity company (PLN) is that they have a lot of electricity stored to provide due to their miscalculation on the future demand growth of electricity. Also, PLN is currently in huge debt and therefore their business has been in a difficult situation.
What I should like to ask here is whether this coal-fired power plant project in Indramayu, Indonesia is really necessary. I would also like to ask if it is appropriate for Indonesia to get an even bigger debt to produce electricity that is not even needed. Considering these points and also the fact that there is strong opposition from the local community, Japan should immediately stop its support to this project.

What is the Indramayu Coal-fired Power Plant Project?
The project plans to construct two 1000MW-sized power plants in Indramayu Regency, West Java. JICA has conducted a feasibility study for the first plant. JICA also provided financial support for Engineering Service (E/S loan – closed in 2013). They are now waiting for the official request from the Indonesian government to finance the first plant.
Local farmers have been strongly opposing the project due to their concerns that they may lose their land and accordingly their means of living. After the farmers won the lawsuit on the Environmental Permit, they have been severely suppressed by the government through a series of human rights violation cases such as farmers’ false accusation, arrest and imprisonment.
More details are available here (in Japanese).

Mar 29, 2019 - By Christina Figueres
Japan: a new vision for real climate leadership
Apr 19, 2019 - By Friends of the Earth Japan
Climate Leaders do not fund coal! PM Abe should commit to coal phase out
Apr 23, 2019 - By No Coal Japan
Over 50 Japanese and international environmental groups publish open letter to PM Abe and launch ‘No Coal Japan’